The nano glass sealant, tested by the TÜV Thuringia, is manufactured on the basis of chemical nanotechnology. It creates an extraordinary beading behavior of oily and aqueous liquids. The use of a nanotechnical glass sealant simplifies cleaning considerably and thus saves time and significantly reduces the use of cleaning agents (cost savings). Problem areas such as skylights and conservatories in particular virtually clean themselves from the rain. Dirt has just as few adhesion possibilities inside and if it does, it is much easier to remove, since the surface tension offers no or only a slight possibility of adhesion. The nucleation in the bathroom and kitchen is also significantly reduced. In the field of photovoltaic systems, the “yield” can be increased significantly by glass sealing. The glass seal is also very suitable for ceramic surfaces (wall tiles in the bathroom and in the shower cubicle, wash basin, bathtubs, shower trays and much more). The nanoprofi® glass sealing is a further development of the glass sealing known up to now. It is ideally suited to seal hard-to-reach glass surfaces in just a few steps. In the following years, the seal does not have to be refreshed again and again, as long-term protection is achieved through silicon compounds. It has a shelf life of up to 10 years, so that it is often used on surfaces such as photovoltaic and solar systems, winter gardens and glass roofs. In contrast to the tried and tested nano-seals, this glass seal can also be applied in direct sunlight. It has an excellent water, oil and dirt repellent effect and can also be used indoors (shower cubicle, enamel, ceramic). Photovoltaic and solar systems achieve a significant increase in performance due to the large-scale rain (easy-to-clean effect), which also washes the dirt down. 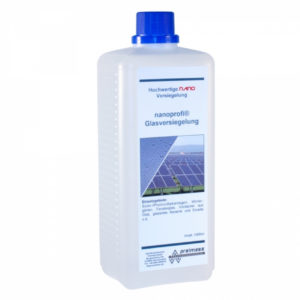 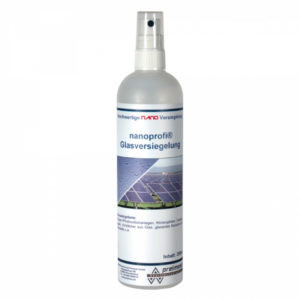